Excavation at Saridkhel: Excavations at Saridkel was under taken during the month of Feb-March 2004 under supervision of the Superintending Archaeologist, A.S.I., Ranchi, Jharkhand. The Saridkel over all was an important city in the early historical period. After a systematic exploration in the year 2003-04. The site has unveiled bygone days remnants, which has helped to study the culture in general and Saridkel in particular. The stratigraphy description and structural analysis is demarking three successive phase with sub phases.
The excavation revealed two occupational periods, belonging essentially to the same culture. Although no building remains of Period-I were unearthed in the limited area under excavation, the occurrences of baked bricks in the strata belonging to this period clearly suggested the use of bricks. A number of pits were encountered, which forms their contents of charcoal, iron slag and sand, it is concluded as appear to be iron smelting ovens. Period-II was marked by an intensive building activity. A massive defence wall consisting of backed bricks (size 41 x 26 x 7 cm) was raised along the periphery of the mound in alignment with the course of the river, apparently to protect the settlement.
The pottery was mostly wheel made and characterized by coarse fabric, thick section and red colour. In association with red ware, the grey, black and red slipped ware also noticed. The assemblage of such typical forms as the ledged lid, flat-based bowl, sprinkler, and incised decorated design strongly suggested a Kushana influence. In other findings iron objects as well large iron slag also reported. In copper objects l hooks and rods, clay sealings copper coins, possibly prepared from mould, terracotta, hop-scotches, terracotta human and animal figurine, beads of chalcedony, agate and carnelian and a two legged saddle quern are reported from here.
The remains of large fortification wall is quite suggestive that this site is having its own planning and enough security arrangement. From the antiquarian remain and pottery it can be safely said that these people were iron users and well versed with then Iron technology. The well fortified royal houses and few other unexposed area most probably the part of royal house or may be the part of Monastery which needs further efforts to establish this fact. Although no datable find was reported from the excavation, it is reasonable to infer that the culture may belong to the 1st and 2nd Century of the Christian era. Excavation at Itkhori- Ranchi Circle carried out excavation at Itkhori in the district Chatra of Jharkhand, in the year 2011-12 and 2012-13. The archaeological mound of Itkhori is located on the right bank of the river Mohani, which is 1 km west of the village Itkhori. The village Itkhori is situated 150 km from Ranchi, 55 km from Hazaribagh, and about 35 km from the district headquarter Chatra. With a view to ascertain the culture sequence of the site as well as the material culture of the Pala period, a total number of 14 trenches have been dug out. Out of which two quadrants were been cut up to, the natural soil and reveals a 1.50 meter deposit of single cultural site dated 9th to 10th century A.D. The excavation reveals ruins of stupa. This stupa oriented east to west measures 10.90mt and north to south 13.90mt. Consists of rectangle base (medhi) made of two courses of sand stone block and over it lies the rectangle dome made of brick of three courses. Interestingly most of the sandstone blocks of the base is carved with decorative designs, mythical female figurine, kirthimukha, gandharva couple etc. Another stupa at a distance of 1.60meters towards south of the main stupa measures 6.40sq. meters. A number of sculptures panel of sandstone depicting seated Buddha in various mudra, head of Buddha, male attendant of a deity, votive stupa etc were excavated . Along with terracotta objects of beads, hopscotch, potteries, animal figurine, gamesmen, iron objects of nail, clamps, sickle, arrow-head, ring and stone objects of hopscotch, bead, skin rubber, Shivalinga, saddle quern, broken pestle etc. were unearthed. 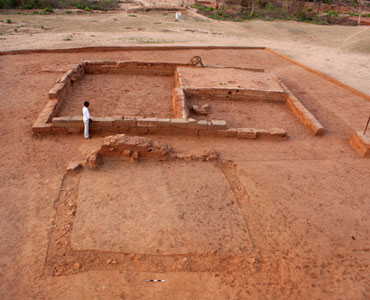 Excavation at Kabrakala- Ranchi circle of ASI conducted excavation at Kabrakala village of Palamu district in the year 2017-18. After excavation, it has been revealed that the site has been occupied during NBPW period and people’s settlement was there until late Gupta period. Even today, one can see that the mound is use for habitation purpose by the local peoples. The evidence after the excavation suggests that the site has well developed during the Jnapada period. During Mauryan period, the site has a well-developed town settlement with brick structures and good sanitation system in form of ring wells .The entire mound is disturbed due to settlement of villagers and agriculture over the period.
The evidence from site Kabrakala and finding around the nearby area suggest that the Kabrakala had a bigger settlement as compare to other site and unlike other sites it had fortification too. A well-developed sanitation system, trade and agriculture activities in past, the antiquities collected by the villagers like seals, stamps etc clearly indicate that it was well-developed economy in the bygone days. The antiquities like T.C beads, games man, animal figurines, iron objects suggests that this period had also a well developed culture .The finding of 36 number of vessels place in a row filled with sand indicates that some ritual practice has been performed here.
The evidences from Gupta period are less in number as compare to previous two periods. Which indicates that Kabarakala started losing its significance may be due to decline in trade activities, as this level did not yield any significant antiquity, which could reflects towards the flourishing trade in these areas. The main antiquities are T.C bangles, glass bangles, T.C beads and iron objects, potteries are red in color and sometimes decorated.
The next period belong to post Gupta period, the important findings from this period is remains of brick structure revealed. The traces of this brick structure is scattered in and around the entire village. That suggested there were a developed town planning in this period. According to local folk lore that there was a local king named Kabar Raja and he was king of Kabarakala. The lore also informed that there were a war between the king of Rohtas Raja Rohit and King of Kabrakala, due to this war the village Kabarakala was destroyed. Scientific Clearance work at Haradih- Ranchi Circle of ASI conducted scientific clearance work towards the eastern and southern side of modern temple at Haradih in the year 2014-15.During clearance, group of Shivlingas along with their feet were exposed in the eastern side, while towards southern side two massive brick structure were encountered. One of them is a brick platform topped by a Shivlinga made of stone. Another brick structure is a small cell but the very purpose is unknown. Besides, a number of potsherds predominantly of Red ware and an iron object were found during the scientific clearance work.